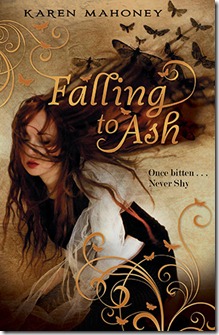 You can’t choose your family… living or dead.
Trapped between two very different worlds, newly made vampire Moth is struggling to find her place in either. Not only does she have to answer to her strict Irish-Catholic Dad, but her over-protective maker, Theo, is intent on making her the star attraction in his powerful Boston vampire clan. Moth will have to pull off the double-act of the century to please both of them…
Adding to her problems is the dangerously attractive Jason Murdoch, a trainee vampire hunter who loves to play cat and mouse in his spare time (Jace = cat; Moth = mouse). But when the teenagers of Boston’s wealthiest families start to disappear, it forces Moth and Jace into an uneasy truce. Will they be able to solve the mystery behind the disappearances—before someone winds up undead?

Something Stirs
There has been an influx in vampire stories lately, audiences craving to read about more of them and it is due to this that there is a danger that most vampire stories become stereotypical, following the pattern of so many before them. It is also the reason that I now tread lightly when it comes to vampire stories. I love them, but I’ve been fixated on them for a long time and I am now starting to branch out and find other stories, creatures, to enjoy. But then every now and again a new vampire book may capture my attention, just as Falling to Ash did. I have not read Karen’s other series, The Iron Witch, and so I had no idea what to expect of her writing but I am pleased to admit that I truly enjoyed reading this book and was glad that I took a chance on it. This book is one that I would highly recommend as it was a read that I found extremely entertaining and quickly became a book I’d happily read over and over again.

It’s Different
One of the things that makes Falling to Ash a book that I favour, is the way that Karen hasn’t made being a vampire a sexually alluring concept. There are moments in the book where we see Moth’s maker as someone who enticed her and uses his powers and charms to get people to allow him to willingly take their blood, along with some other moments of humans handing themselves over to vampires, but through the protagonist, Karen makes it known that being a vampire isn’t all it seems. The depiction of vampires in this novel is gruesome and vivid, it leaves nothing out about how dangerous it is to create a vampire, or how terrifying the concept of forever can become. It truly encapsulates the real, rawness of being a vampire, and in the case of Moth, of being a new vampire.

It is as she is dealing with being such a new vampire, of not just adjusting to being a new adult but also now a vampire, that Moth becomes entangled in the middle of something bigger than she could have ever realised. Trying to uncover the truth behind the death of an old classmate, Moth runs into the hunter Jace, and it soon becomes apparent that being a vampire is the least of Moth’s worries. I was truly entranced by the plot of this book. I wanted to know what was going to happen next, I needed to know how things were eventually going to end, and while some bits were predictable, they never made the book any less enjoyable. It had a fast pace, was full of action, and continuously had me turning the page.

Changes People
It probably goes without saying that the characters in this book were all really well written. No one was weak, stereotypical, or just annoying. Karen has managed to grasp her characters and truly allow the reader to feel and understand everything that they deal with and go through. Moth was probably my favourite character in the story. She had so much to deal with, and yet she was still rebellious and defiant. She was strong but she knew her limitations but she was also fierce and loyal and had an extremely large heart. I loved feeling how torn she was between her two families, she needed to be loyal to both but she didn’t know how to do it because one way or another, she would ended up betraying someone. I loved reading her story and witnessing how she dealt with everything.

I also adored Jace. He was fun to read about but he also had a lot going on in that little head of his. A father that trusted him but just left when he felt necessary, a strong forbidden attraction to Moth and an even stronger desire to do what was right. He was the perfect guy to have in this story, the kind of hunter that I always imagine when writing my own stories or read other ones like it. He was just as conflicted at Moth, and that helped to make him a more lovable character. It would be hard if Moth had been conflicted but Jace just strolled through the story without a care. I also adored the two of them together. I’m always very picky when it comes to romance but these two felt so right together, it wasn’t ever going to be an easy journey and I am really interested in finding out what will happen with them.

Until It Goes
Despite all of the dark, dreary feel this review is painting Falling to Ash to be, it is also a book full of humour and comedy and one that will have you laughing quite often. With Moth’s narrative at the forefront, Karen has brought comedy into this dark world and this really brought the story alive for me. Already on the first page I was giggling softly to myself, enjoying the world view that Moth was presenting to me. If anything, I feel that it is this that sets this book apart from the rest. This isn’t a sexy vampire novel, but it isn’t a truly dark vampire novel either, nor a fully comedic vampire novel, it’s a combination of the three altogether; a unique and compelling style that made this book truly captivating and fascinating.

Ending It All
All in all, this novel was one that I found myself really enjoying. It had all the elements of a decent novel that keeps you entertained, from dark and gruesome creatures, a forbidden romance, a complicated twisty plot, and a bit of light humour to bring it all back down again. It was interesting and held a depth that a lot of books struggle to reach. This book is a YA story that would probably be enjoyed by a lot of adults and is probably better for those on the older end of the YA as I feel that younger audiences wouldn’t be able to fully enjoy the full extent of this story as a lot of the issues and themes that creep up would not be applicable to them. I would easily recommend this book to anyone who likes vampire stories, or anyone who just wants something different, but really, I would just urge everyone I knew to go out and try this book because it’s a really great one that deserves to be read.

** I received this copy from the publishers in exchange for an honest review. I was not compensated nor was I required to write a positive review. **

Behind The Blog #29 - Gratitude