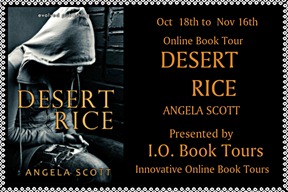 Hey Guys!
So today I am hosting Desert Rice by Angela Scott for the blog tour. I have for you my review and a lovely author bio under that.
But, more importantly, there is also a giveaway for the tour of 10 ebooks (INT) and 5 paperbacks (US Only).
Enjoy!

Samantha Jean Haggert is a beautiful twelve-year-old girl—but no one knows it. All they see is an awkward boy in a baseball cap and baggy pants. Sam’s not thrilled with the idea of hiding her identity, but it’s all part of her older brother’s plan to keep Sam safe from male attention and hidden from the law. Fifteen-year-old Jacob will stop at nothing to protect his sister, including concealing the death of the one person who should have protected them in the first place—their mother.
Sam and Jacob try to outrun their past by stealing the family car and traveling from West Virginia to Arizona, but the adult world proves mighty difficult to navigate, especially for two kids on their own. Trusting adults has never been an option; no adult has ever given them a good reason. But when Sam meets “Jesus”—who smells an awful lot like a horse—in the park, life takes a different turn. He saved her once, and may be willing to save Sam and her brother again, if only they admit what took place that fateful day in West Virginia. The problem? Sam doesn’t remember, and Jacob isn’t talking.

It All Starts
The very first thing that should be noted for this review is that while the protagonist is twelve throughout most of the book, this is not a book for children. With the topics that are covered in this book, it is definitely aimed at older young adults and adults themselves. It is a very cleverly written novel that I found myself reading in almost one sitting and enjoying every minute of it. When it first started, I was unsure whether this would be the book for me but as the story progressed and my intrigue was piqued, I soon found it incredibly difficult to put the book down until I knew exactly what was going on – because the thoughts in my head were definitely spiralling out in all directions! This was a read that I would easily recommend to others and these are the reasons why.

They Must Run
This novel starts out with a rather gruesome scene, two children are carrying their dead mother back into their trailer. The descriptions are very intense, seen through the eyes of a twelve year old, giving the scene a little bit more punch. The story continues as the children flee, running away so that they don’t get split up by the social services. With many different obstacles, the story is very entertaining and compelling – you simply need to know what will happen next. The writing style was truly magnificent throughout this book. I have read one other book that is written through the eyes of a young child and the one thing I found amazing was the way you knew what was going on without it being explicitly stated simply because you were an adult. Desert Rice was extremely similar to this. There were many moments in this book that were simply eluded to, seen through the eyes of someone who doesn’t understand and translated by an adult reading the book with understanding and knowledge. A very clever and interesting style.

They Must Hide
It is nearly impossible not to like Sam in this story. There are times when you may have felt like rolling your eyes but, taking in her situation, it is soon reminded that she is just a twelve year old girl, struggling in a new and foreign world. She has her flaws, she has her positive traits and it is her story that we’re essentially reading. Sam is scared, she’s worried and she doesn’t know what is going to happen but she’s also strong, curious and cautious. All in all, she is a well put together character that I found myself liking. Jacob, on the other hand, is a character that it took me a while to like. Some of his actions caused me to grit my teeth and clench my fist but not because he was necessarily a badly written character, but just because I couldn’t understand his mentality – just as Sam couldn’t. My feelings towards him changed dramatically towards the end of the book and I found myself annoyed that I had disliked him so throughout the rest of the book. There are other characters in this book that I truly admired, like Boone and Laura, who helped to give me hope in my heart and were just really amazing characters full of soul and life.

They Must Remember
The plot of this story, the way that it all came together was truly amazing. I had guessed a few things along the way in the story but the actual conclusion came as such a surprise that it actually caused me to stop reading for a few moments. Angela threw me through a loop, one that instantly made me like this book more because I simply wasn’t expecting it but also because it made the rest of the book make sense. It was the kind of ending that truly tied up every single plot hole that had been left. The actions of the characters were suddenly understood, the beginning changed entirely in my eyes and the entire story took on a whole new level and meaning. This helped to make the book so much more intense and brilliant and is possibly one of the most shocking endings to a story I have read in a long time.

They’re All Alone
Overall, this book was a completely stunning read. It kept me captivated and forced me to simply carry on reading. I found it incredibly difficult to stop as I just simply had to know what was going to happen. It was brilliantly written with interesting scenes and a clever writing style. It is a book that I would easily be able to read again but probably not straight away. The message and themes in the book are hard-hitting and heavy and this isn’t a light, fluffy read by any means. If you’re looking for something with a bit of humour and some light-hearted romance, steer clear of this book, but if you’re looking for something a bit darker, more realistic, and one that holds an incredibly powerful punch, then this is definitely a book that I would recommend. This book tells the tale of a twelve year old and a fifteen year old who are alone in the world and just want to be able to stay together. It is full of twists and turns and moments that will cause you to rethink the world you live in. A marvellous read. 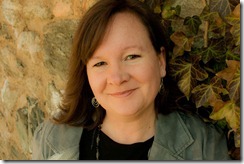 Angela Scott hears voices. Tiny fictional people sit on her shoulders and whisper their stories in her ear. Instead of medicating herself, she decided to pick up a pen, write down everything those voices tell me, and turn it into a book. She’s not crazy. She’s an author. For the most part, she writes contemporary Young Adult novels. However, through a writing exercise that spiraled out of control, she found herself writing about zombies terrorizing the Wild Wild West–and loving it. Her zombies don’t sparkle, and they definitely don’t cuddle. At least, she wouldn’t suggest it. She lives on the benches of the beautiful Wasatch Mountains with two lovely children, one teenager, and a very patient husband. She graduated from Utah State University with a B.A. degree in English, not because of her love for the written word, but because it was the only major that didn’t require math. She can’t spell, and grammar is her arch nemesis. But they gave her the degree, and there are no take backs.

My Thoughts on… Bring Me Back by B.A. Paris

My Thoughts on… Little Boy Lost by J. P. Carter