Hi All!
Today is my spot on The Fourth Monkey blog tour and I have for you all a guest post with J. D. Barker himself! 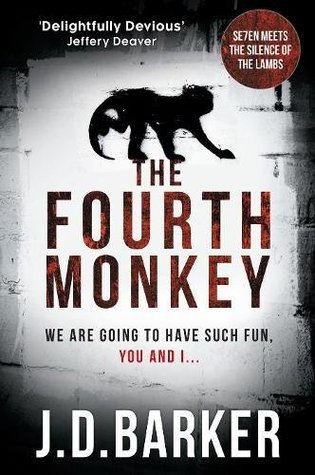 Se7en meets The Silence of the Lambs in this dark and twisting novel from the author Jeffery Deaver called, “A talented writer with a delightfully devious mind.”

For over five years, the Four Monkey Killer has terrorized the residents of Chicago. When his body is found, the police quickly realize he was on his way to deliver one final message, one which proves he has taken another victim who may still be alive.

As the lead investigator on the 4MK task force, Detective Sam Porter knows even in death, the killer is far from finished. When he discovers a personal diary in the jacket pocket of the body, Porter finds himself caught up in the mind of a psychopath, unraveling a twisted history in hopes of finding one last girl, all while struggling with personal demons of his own.

With only a handful of clues, the elusive killer’s identity remains a mystery. Time is running out and the Four Monkey Killer taunts from beyond the grave in this masterfully written fast-paced thriller.

Here are a few of my favorites.

Stephen King (obviously). I respect the guy on many different levels. I grew up reading his books and he greatly influenced the way I write. He’s one of the most down-to-earth writers out there and never shies away from answering a question when I bug him about something as mundane as, “Why did you write that in present tense instead of past?” He has no reason to talk to me, yet he takes the time anyway.

Dean Koontz is the same thing. This is a guy with nothing left to prove but he’ll take time out of what I am sure is a busy day to answer a business related question. He’s seventy years old now and still putting in eighty hours a week. That is amazing.

Jeffery Deaver is another. He read my work before I was published and gave me a terrific blurb. He takes time out to run the Mystery Writers of America and also teaches. He does whatever he can to help the next group of writers coming up.

As with any industry, there are a few bad apples out but for the most part, authors tend to help each other out whenever possible and that’s one of my favorite things about this industry. I wouldn’t be where I am today without people like this paving the way. It’s inspiring and as a result, I do as much as I can to pay it forward, keep it all going.

One Italian Summer by Keris Stainton