Hey Guys!
So I’m finally going to let you all get to know Theta a bit more! In my opinion he’s absolutely awesome, but here’s just evidence of that so you can all see it too!
Without further Ado; 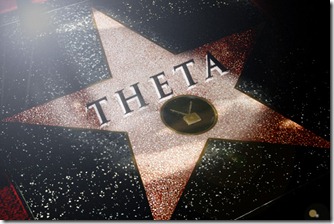 Tell us a little something about yourself!
Firstly, thank you for the interview.  It’s nice to be given airspace on somebody else’s blog.

For those of you who either know me through Twitter or through chatting to me, I’m a major film addict and try to get to my local cinema once a week.  I also enjoy theatre, which I never thought I would do after the torture of enduring Shakespeare at High School (cough, splutter) years ago (it was “The Scottish Play”), but I now try to get to London’s West End at least once a year to see a few plays and musicals.

I returned to reading as a leisure activity after an absence of quite a few years where I would half read books and throw them away, but a friend of mine, who we’ll come to later persuaded me to join Goodreads and then get into blogging.

Oh… and I’m a major Whovian too.

How long have you had your blog?
The blog’s been going since just after New Year 2012.

Do you enjoy running your blog?
Yes, I genuinely do.  Not so much the whole “What have I got to write about?” thing, but I do enjoy coming up with a finished product.  For me, it’s the whole pleasure of “meeting” new readers, albeit virtually, finding out what other people are watching and reading, and making some new friendships.

When you started, did you ever think that it would end up the way it has?
Well, it was a bit of an unknown quantity for me when I first started so I was genuinely nervous about blogging because I thought, “Have I got something to say that other haven’t said?” and I did feel like I was bursting in on a well established “family”.  However, I’m now of the mindset that it’s not so much a case of saying something that someone else hasn’t said, but making my opinion known alongside other people’s opinions, which are equally as valid.

Plus, it’s lovely to get ideas of new books to read and speak to new people.  An example of this is the fact that I’ve got into YA and really enjoy it.  (I could go on and on about how YA is important).

Is there an interesting background story to the name of your blog, if there is, tell us!
Well, it’s not an interesting one, really.  I used to write reviews for the Rotten Tomatoes website and due to a variety of factors I decided to strike out on my own following some prompting by a group of friends who I made through the site, including Reanna from the “On The Shelf” blog.

Anyway, to cut a long story short, I decided to start my blog shortly after New Year and the only name that popped in my head was “Resolution Corner”.  Sorry, as I said, not that interesting, really.

As we’ve got this far without mentioning it, why not tell us a little something about your blog, what you post, how it runs, who you cater to, etc.
I started it up as just a book and film blog as they are my two main interests where I would get a regular output.  However, after I went to see the John Williams Birthday Concert back in February I decided to include theatre.

I did include a couple of reviews for the “Sherlock” series and genre series reviews may return if people want to read them… especially when Season Seven of “Doctor Who” returns.

For the regular postings, I do book, film and theatre reviews as I read or seen the book/film/play in question – what can I say, I have a poor memory plus I try to bring out the original impact of how it felt to me as I do get personally attached to something like a book that I’ve read for a while, whether my opinion is positive or negative.

I try to keep a regular format so people can get an idea when certain articles take place, but I’m not afraid to experiment on the basis that if I get bored writing the blog it’ll show up, which means people will get bored reading it.

Do you participate or host and blog memes? If you do, which is your favourite?
Hmmm… I don’t know if they’re memes as such, but I do host several regular articles within my site plus I’m trying out a couple of new ones.

Every week I host “Vlog Of The Week” where I promote vlogs which have caught my eye and give a little bit of background of the person behind the blog.  I am looking to change things up a little and I may be alternating this one with my new regular posting “Desert Island Books” where I ask a blogger or vlogger to say which books they’d like to be stranded on a desert island with.  (If anyone wants to take part in either of these, please Tweet me as it’s my way of saying Thank You to the people who have supported me).

I do a once a month Book Haul where I say which books I’ve bought or got as freebies through Amazon by keeping an eye out for free book promotions on Twitter.

The final one that I am experimenting with is “Book v Film” where I compare the experience between the book and the film which was an idea given to me by one of my readers, Tabetha.  The first one was on “The Hunger Games” and having read all three books, it was interesting to compare the book against the film especially knowing what I know now.

*EDIT* Rather than doing the once a month Book Haul I mentioned, which was problematic this month as it was getting too unwieldy.  I am now going to take part in the new weekly meme created by Vicky from “Books, Biscuits and Tea” called Showcase Sunday, which is her replacement for IMM.

What about blog tours and blog hops? Have you ever or do you ever want to participate in them?
Never participated on a blog tour.  They’re not something that’s on my radar just yet, but never say never.

I do read a lot of other blogs out there, more to get ideas of what to read rather than any kind of blog hopping activity.

What is the best book you read in 2011?
This is the one where I’m on dodgy ground because I really only got back into reading because of my Kindle that I got at Christmas.

What about in 2012?
A really tough question.  I would have to say “The Fault In Our Stars” by John Green just for its emotional impact and “Live for the day” message.  But there are honourable mentions for “Divergent” by Veronica Roth which was my first Dystopian read and “The Hunger Games” trilogy.

My favourite independent book so far is “10 Ways To Kill A Cupid” by Leigh Parker.  It is so funny and I’m looking forward to the sequel.

Has there ever been a book that you haven’t been able to finish? If so, what was it? And why couldn’t you finish?
My most recent one, not for the want of trying, is “The Gift” by Cecelia Ahern.

I am a sucker for “Christmas Fable” type stories (my favourite film is “It’s A Wonderful Life”) and last year was the third year in a row where I tried to read this book cover to cover… and the third year I gave up.

What is your favourite book genre?
I seem to be gravitating towards YA at present, but I’m trying to add new books into the mix every now and then, especially after reading “The Hunger Games” trilogy back-to-back-to-back.

On the main, it’s a case of anything that takes my fancy.

Quick Fire Round
ebook or hardcopy?
E-book.  I am a confessed lazy reader and e-books keep my interest which leads me to think that it’s a psychological thing about book size.
ya or adult? At present, YA with a dash of adult
vampires or werewolves?
As a fan of George from the UK version of “Being Human”, werewolves every time.
chocolate or vanilla?
Easy answer – chocolate (especially chocolate cupcakes and chocolate cake).
harry potter or twilight?
Get me on that Hogwarts Express, it has to be Harry Potter… plus the fact that the word “Expelliarmus” has featured in a “Doctor Who” episode along with the Tenth Doctor’s confession that the seventh book made him cry.  “Good Old J.K.!!!” indeed.
four or peeta?
I can only answer this as a male reader, but at this stage the jury’s out as I’ve only read “Divergent” (at the time of writing) which is only one book in comparison to the three that have featured Peeta.  However, both are well written characters who have faced some really nasty trials.

The reason I say this is based on Katniss’s motivations throughout the whole “Hunger Games” trilogy.  Katniss is guided by some moral instinct to protect others – whether it be her family and friends in District 12, the friends and “allies” that she makes in The Capitol or The Hunger Games, and most predominantly Peeta.  This behaviour starts right from the opening chapters of “The Hunger Games” when she becomes a Tribute in Prim’s place and this becomes her default setting throughout the book.

Tris’s choice at the start of “Divergent” appears to be guided by self interest in so much as she feels that she doesn’t belong in Abnegation.  Granted, she does make some difficult decisions which are borne from the fact of her personality traits, but I have to say that it’s that first choice which could be seen as self interest that sets the template for Tris whereas Katniss does what she has to do out of necessity and a moral urge.
series or single?
No preference.
blogger or wordpress?
Blogger – it’s easier for this particular techno-incompetent to use.

Is there anything else you would like to say about you or your blog?
Just a big thank you to everyone who has either commented, suggested, tweeted or just said Hi.  You’ve been really supportive in these first few months of the blog.

That means a great deal, confidence wise, to me and it proves what a great community the book blogging/vlogging community is.

Finally, if you want to be in a “Vlog Of The Week” or a “Desert Island Books”, please get in touch.

So there you have it! You now know more about Theta now. All you need to do now is hop along to his blog here and follow him because he is awesome.